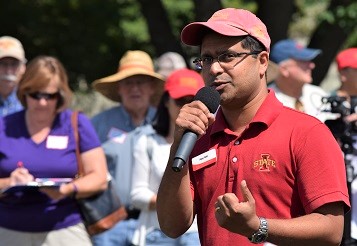 AMES, Iowa – The American Society for Horticultural Science has chosen Ajay Nair as its Vice President for its Extension Division.

Nair is an affiliate professor and extension vegetable manufacturing specialist within the Division of Horticulture at Iowa State College.

Nair took workplace earlier this month on the affiliation’s annual conference in Chicago. In his new position as Vice President of the Extension Division, Nair will work intently with ASHS members, universities, business professionals, college students and the general public to advance the initiative and significance of extension horticulture because it impacts the lives of horticultural growers. and form livelihoods.

“I’m honored and humbled to be elected because the Vice President of the ASHS Extension Division,” Nair stated. “I look ahead to partaking with fellow society members, researchers, college students and horticulturists to construct robust and resilient horticulture extension applications in land-grant establishments.”

Nair will probably be instrumental in speaking the significance of discovery and sharing of science primarily based information for the event of socially useful, economically profitable and environmentally sound horticultural manufacturing methods. Previous to being elected to this new place, Nair has served ASHS as President, Vice President, and Secretary of a number of skilled curiosity teams throughout the society, notably vegetable crop administration, business horticulture extension, pest administration, and seed and Stand institution skilled curiosity teams.

Based in 1903, the American Society for Horticultural Science is acknowledged worldwide as one of the revered and influential skilled societies for horticultural scientists. ASHS is dedicated to selling and inspiring nationwide and worldwide curiosity in scientific analysis and schooling in all branches of horticulture.